Change Is Us,
Know Your Rights 知道你的权益,
Survival Is Resistance,
We Are Leaders,
We Will Break Free,
Urban Renewal, and more...

“When the system sucks, whatchu gonna do?” Wei Chen 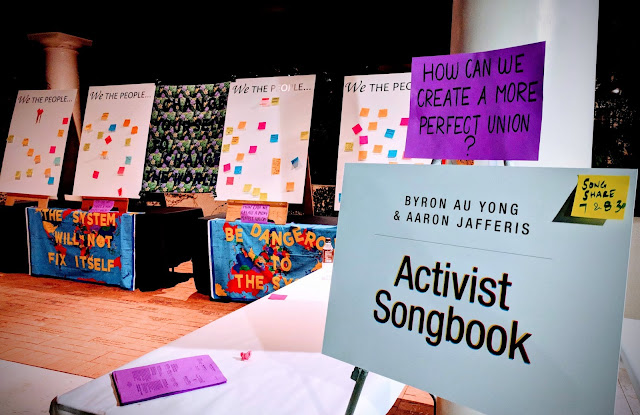 For example, one rap is prompted by Wei Chen’s experience as a U.S. high school student who recently immigrated from China. The rap explores Wei’s journey: from being the 16-year-old victim of anti-Asian beatings, to organizing classmates for an eight day boycott, to building a movement with Asian and Black students that changed school policy throughout Philadelphia. After Wei’s feedback on our initial draft (he wanted a song to inspire and unite, not depress and divide), we rewrote the song’s hook so it can be used in rallies, independently of the rap:


The system separates us by our tongues, by our skin,
where we’re from, where we’ve been,
so we think we will never break the boxes they got us in.

But every time we come together, we win.
We are youth. We are leaders.
We have the power to make a change. I believe this. 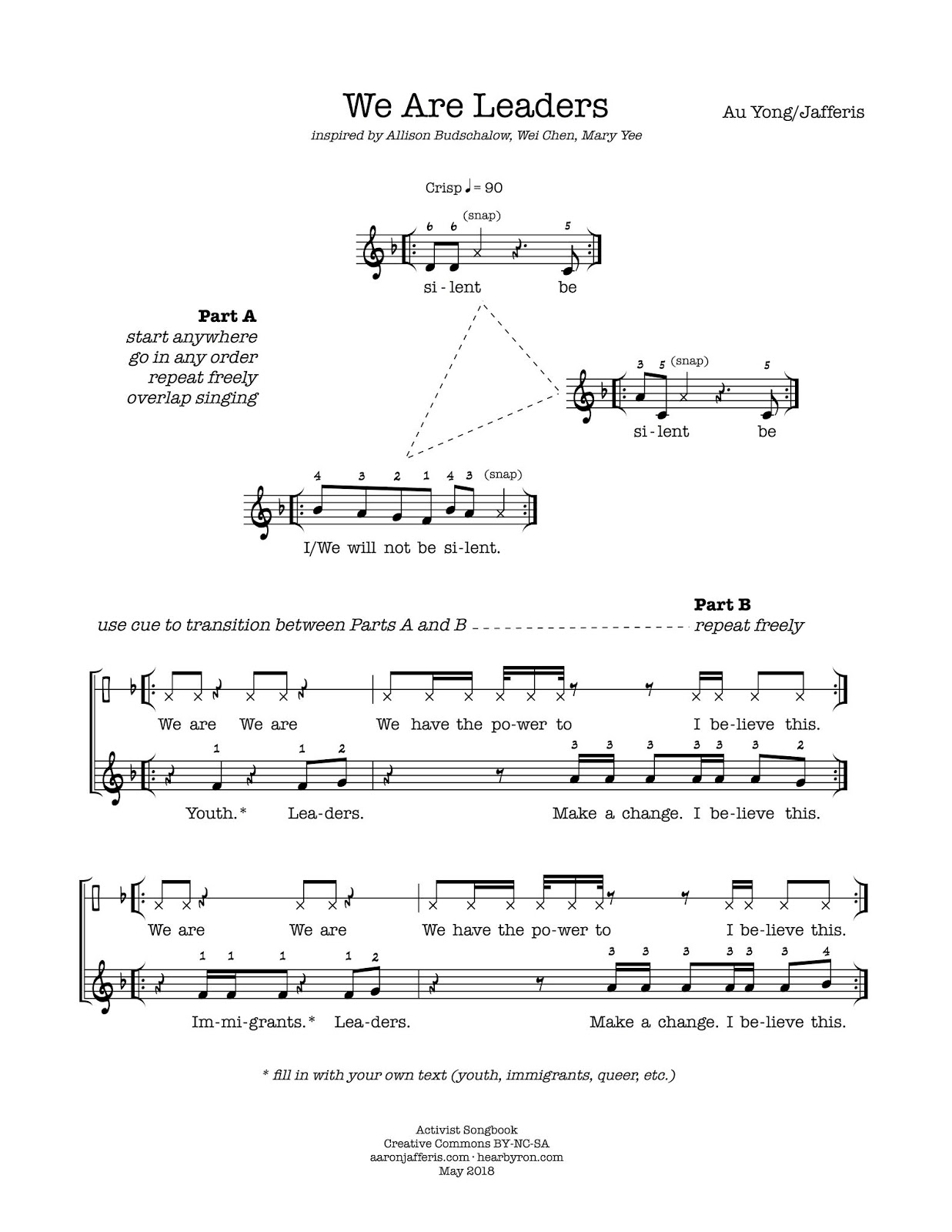 Recognizing the critical role of communal experience in building solidarity, Activist Songbook invites aesthetic participatory action by echoing elements found in protest anthems such as chants, call and response, and sing-alongs. Some of the songs give melody to existing chants or slogans used by Asian American activists in specific campaigns, like this one adapted from Mary Yee’s anti-gentrification organizing in Philadelphia’s Chinatown.


We will not let urban renewal
equal people of color removal;
you will do nothing about us,
without us. 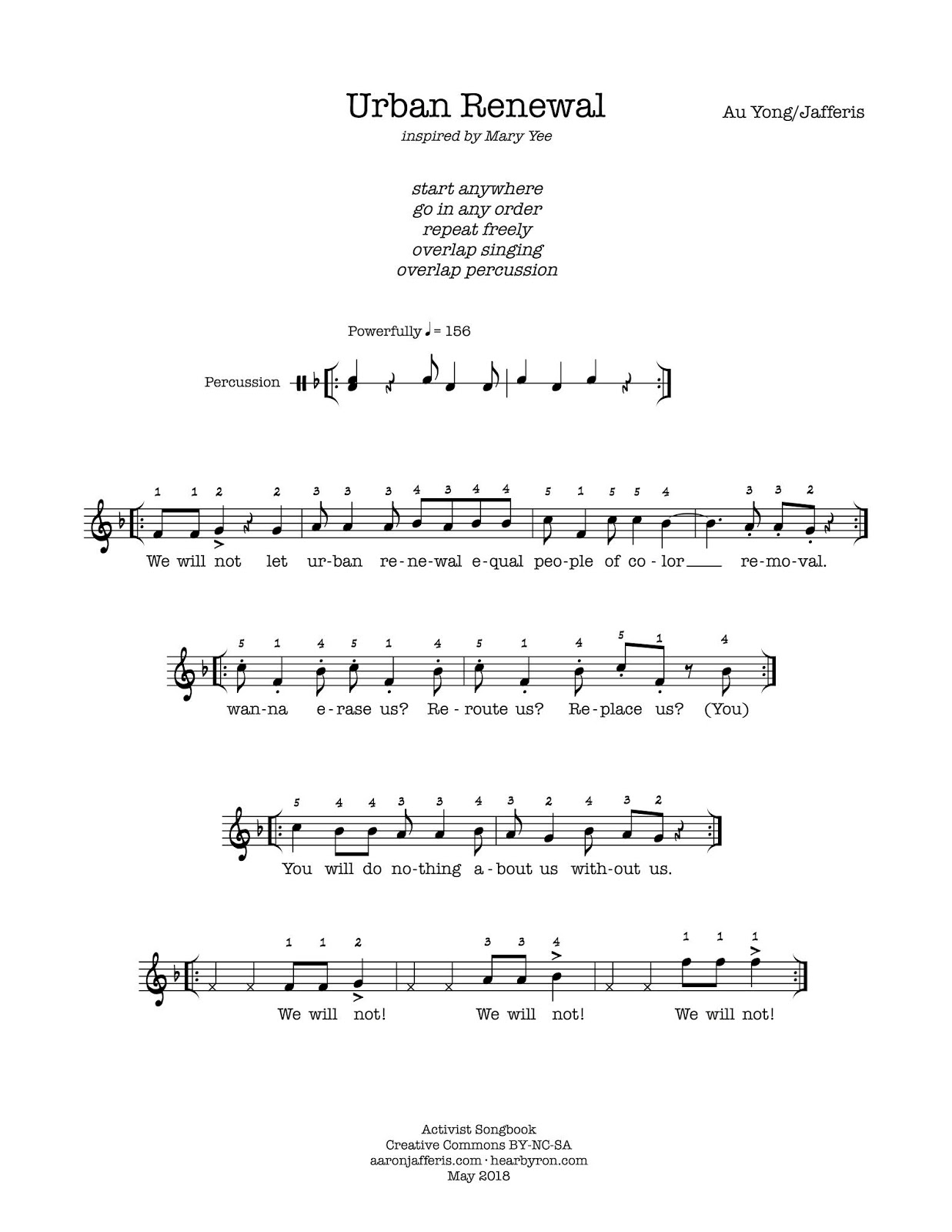 Others are more open and community-responsive than traditional protest songs, inviting participants to improvise/input lyrics and/or melodies:


This is not the end.
This is where we begin
to [speaker with megaphone calls out a tactic; others repeat it].
That is how we win. 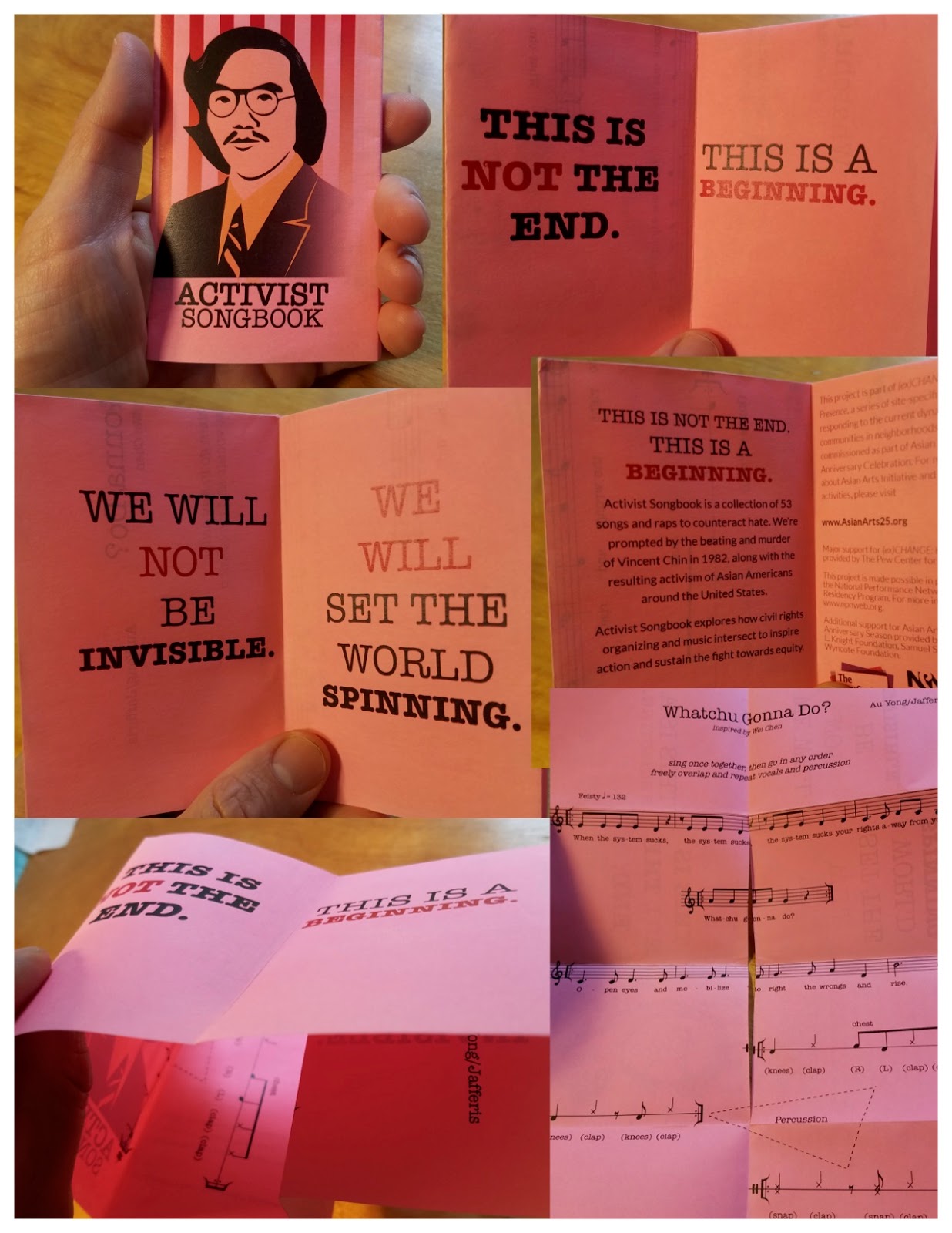 Significantly, Activist Songbook includes an evolving template to support organizers and groups in creating their own campaign-specific material. We began working on this model when Justice 4 Jayson—a group organizing for justice for young Black and Latinx people killed by police in Bridgeport and throughout Connecticut—needed last-minute help creating chants for a march and press conference. Following this, we worked with People Against Police Brutality to help the group create a song to disrupt a New Haven Board of Alders meeting. This helped to delay a vote on a Civilian Review Board until the Alders added subpoena power to the bill. 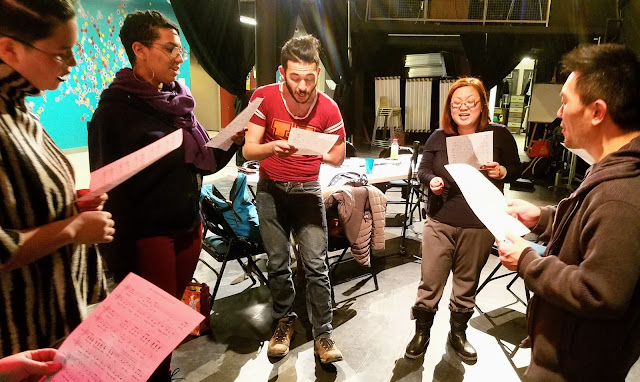 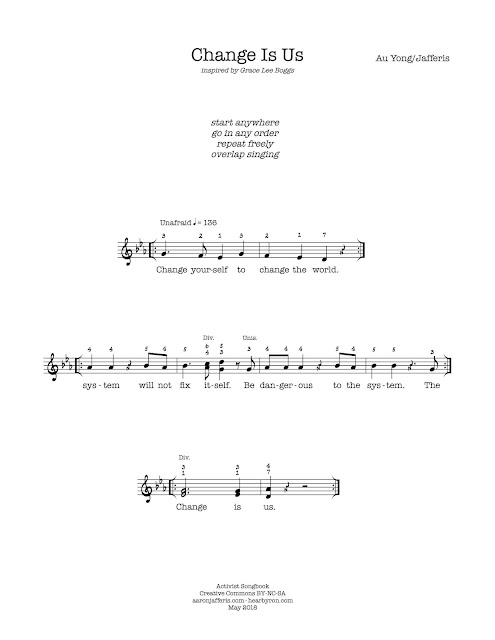 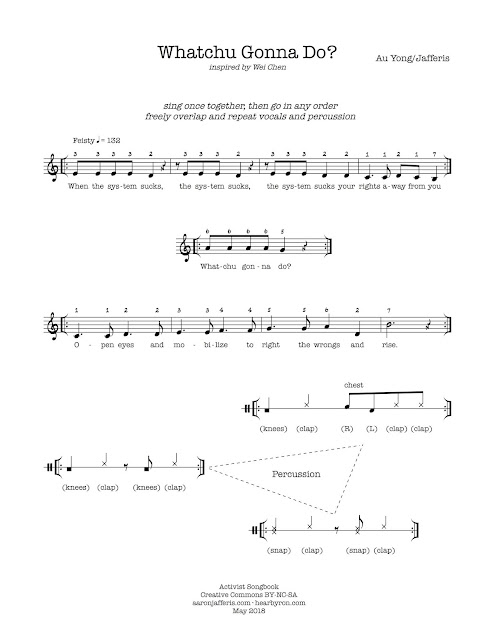 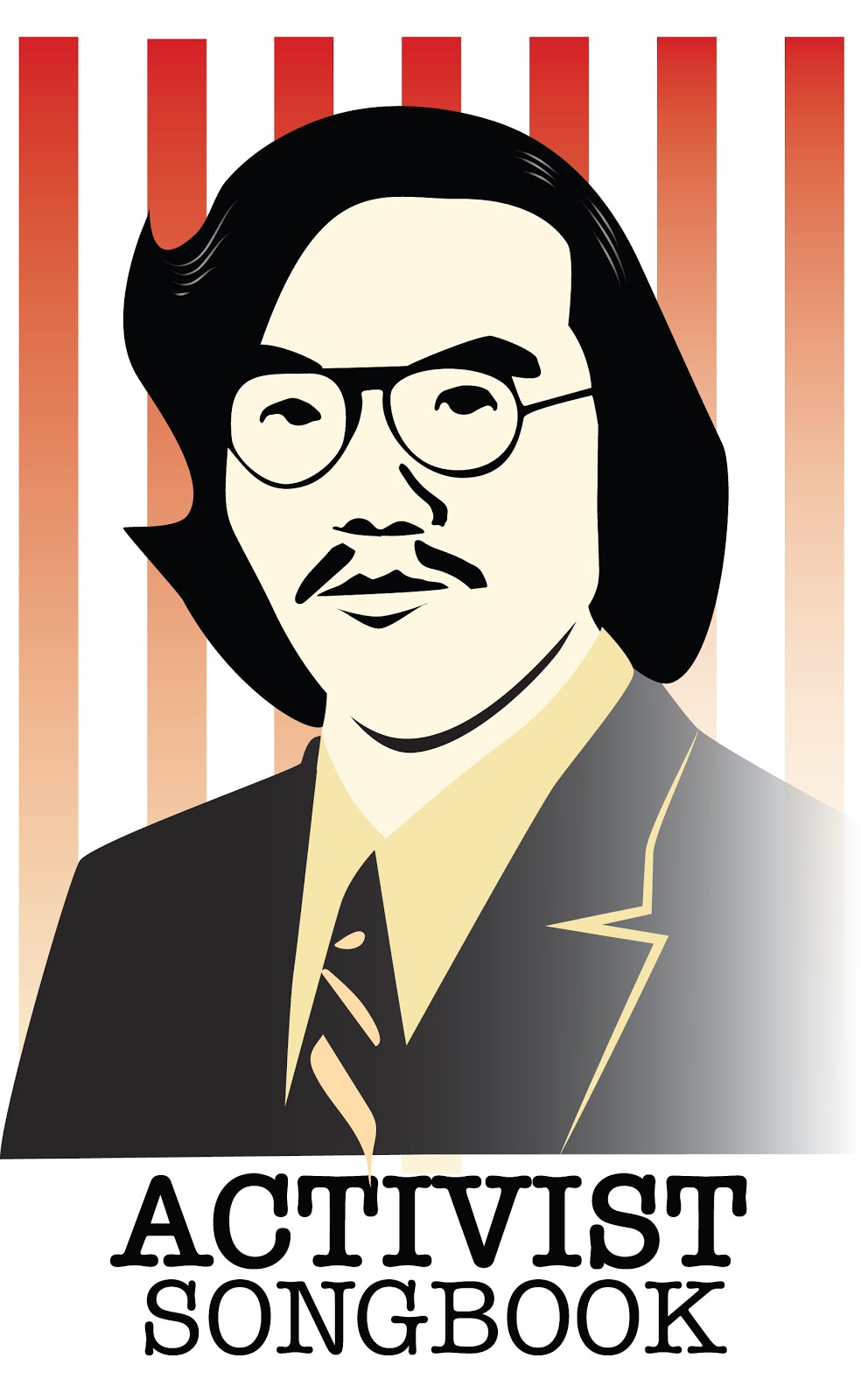 Activist Songbook is a collection of songs and raps to counteract hate and energize movements.

Activist Songbook was commissioned by The New Haven Festival of Arts and Ideas and produced by Octopus Theatricals.

About the Logo
The logo above—designed by tiflindesign.com—is a portrait of Vincent Chin. Activist Songbook is prompted by organizing efforts that respond to the racially-motivated murder of Vincent Chin and the resulting Asian American Movement of the 1980’s.